Been über busy in the last days... hence no blog post.  Time is running out on my thesis so I really have to start kicking ass on that like, seriously.  But alas, I cant resist... I'm getting into this blogging thing ;) 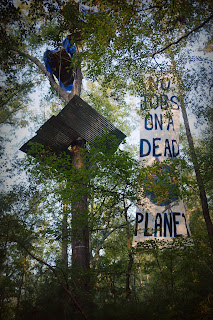 I am struck by the current Tar Sands Blockade. This is some serious direct action... these brave people are putting their bodies on the line to stop the construction of the Keystone XL Pipeline.  Info: http://tarsandsblockade.org/

A couple protesters who locked themselves to construction machinery were tortured by police with pepper spray and tasers. Info on that: TransCanada Actively Encouraged Torture Tactics to be Used on Peaceful Protesters (Day 3)

I found this account, written by one of the protesters himself named Benjamin Franklin, to be incredibly moving:  Tar Sands Blockade: Why are they so frightened of us?
"When I remember what happened, I remember the beauty first. The blue sky, the soaring hawk, the oak sapling mangled by the backhoe we’d stopped. That oak was very inspirational to us as we awaited our fate. By surviving TransCanada’s clear-cutting, it symbolized our own plans to weather the forces marshalled against us."

So beautiful... and it makes me think... that even if we have to suffer so badly to stand up for what we believe in, that someday we'll still look back and remember the beauty that was there.  And all the suffering will have been worth it.

In my heart, I know that's true.


...this is no ordinary oil. It's called "diluted bitumen," and it's highly toxic, corrosive and hot -- and, according to a recent report by the Cornell University Global Labor Institute, three times more likely to spill than conventional crude...

Much of the bitumen is mined in open pits that stretch out to the horizon, an ecological dead zone. The waste water from the processing is dumped into vast toxic lakes, witches' brews of arsenic, mercury and countless other carcinogens. The smell is sickening. It gets into your clothes, your skin.
I spoke with people who live on the edge of this wasteland, whose health and livelihoods have been destroyed by the tar sands industry. High rates of cancer are normal for these communities, where fishermen bring up deformed fish in their nets, evidence of hidden pollution. A woman named Susana -- who now works to fight the abuses of the tar sands industry -- lost 13 members of her extended family to cancer. In one month. Much at Stake as Possibility of Tar Sands Pipeline Looms

Democracy Now! gives a good summary of the issue and the blockade, showing how TransCanada is bulldozing through people's property and destroying the environment... journalists who try to document the action are also being detained: