Wishin' that I still lived in Cali right about now (I did leave a piece of my heart in Oakland, after all..) cause this issue has got to be the buzz on the streets.  Exciting times... if this proposition passes in the upcoming election, it could potentially be a big blow to the GMO industry... cause we have the right to know what's in our food, and we're fighting for it!  Good vid:


Info on the campaign: Why Labeling GMOs is Important

As Pollan says, this initiative could potentially take the food movement in the States to the next level:


"Clearly there is growing sentiment in favor of reforming American agriculture and interest in questions about where our food comes from and how it was produced. And certainly we can see an alternative food economy rising around us: local and organic agriculture is growing far faster than the food market as a whole. But a market and a sentiment are not quite the same thing as a political movement — something capable of frightening politicians and propelling its concerns onto the national agenda.
California’s Proposition 37, which would require that genetically modified (G.M.) foods carry a label, has the potential to do just that — to change the politics of food not just in California but nationally too."
-Michael Pollan, New York Times Vote for the Dinner Party: Is this the year that the food movement finally enters politics?

We're already giving Monsanto a run for their money... they're pouring tons of it in to defeat this initiative.  Here are the companies that support and oppose GMO labeling... and some of its opponents are well known organic food brands (which should be boycotted): 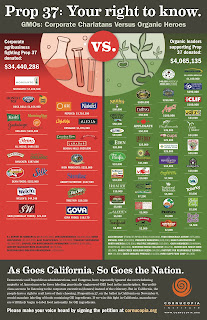 More info on that here: Corporations Stab Organic Consumers in the Back — Familiar Brands Funding Attack and Consumers Right to GMO Labeling

The whole issue of GMOs is important to me... I've bookmarked a gajillion sites on the topic... so I plan to add more info about this in the future.

At this very moment, Monsanto and other pesticide companies are spending more than $1 million a day to convince California voters that it’s not in their best interest to know whether the food they eat is genetically engineered. Monsanto's Lies and the GMO Labeling Battle

Here's a good example of the effects of that: NEARLY EVERY DAILY NEWSPAPER IN CALIFORNIA AGREES: NO PROP. 37