I'm starting to do research on adoption... cause I think a few years down the line I'd like to adopt. 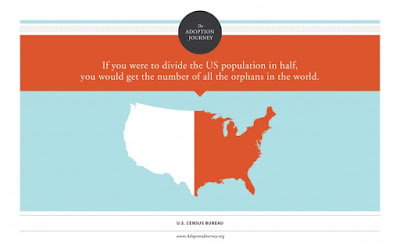 The decline isn't due to fewer orphans worldwide nor waning demand from prospective parents, experts say. It is due to rising regulations and growing sentiment in countries such as Russia and China against sending orphans abroad.

As international adoption rates fall, there is one country that is sending more children abroad: The United States.

As China slows international adoptions, the number of children filling its orphanages is climbing -- rising to 92,000 in 2011, almost a 50% rise from 2004, according to China's Ministry of Civil Affairs.

Costs -- which can be as high as $50,000 -- continue to climb. The wait can stretch for years even after an adoptive parent and child are matched as the adoption paperwork wades through the bureaucracies of both sending and receiving nations.

There are over 120,000 orphans in America, while another 400,000 children live without permanent families
27,000 children age out of the system every year

AdoptUSKids
In addition, most adoptions from U.S. foster care are free and any minimal costs associated with them are often reimbursable. For international adoptions from Hague Convention countries in 2010, service providers charged anywhere between nothing to $64,357, with half charging less than $26,559.
You don’t need to own your own home, be wealthy, have children already, or be a stay-at-home parent to adopt.
While slightly more than half of all children who enter foster care return to their birth families, there are still thousands of children who cannot return home. Of the 51,000 children in foster care adopted last year, 54 percent were adopted by their foster parents.
In most instances, a person’s marital status, age, income, or sexual orientation do not automatically disqualify them from eligibility to adopt. You don’t need to own your own home, have children already, be young, wealthy, or a stay-at-home parent.
In 2011, 32 percent of children adopted from foster care were matched with either a single-parent household or unmarried couple. This includes adoptions by lesbian, gay, bisexual, and transgender (LGBT) families.
Experienced parents and empty-nesters are encouraged to adopt. In most instances, you’re eligible to adopt regardless of age, income, marital status, disability, or sexual orientation. You don’t need to own your own home, be young, wealthy, or a stay-at-home parent.
Placing siblings together is almost always the best thing for them after being separated from their birth parents. It helps provide continuity and protects them from suffering additional loss. Currently 23 percent of children photolisted on AdoptUSKids are siblings who need to be placed together.

The Hope of Being Adopted


Omg i cried so much

Wow, here's a listing of children in IL that need to be adopted and their pictures: http://www.adoptuskids.org/states/aici/browse.aspx

Children's Home and Aid (CHICAGO) - Volunteer
I should volunteer with this place...
Foster Friend mentoring

U of C Adoption Center (International adoption support)
Each year, thousands of children are adopted from overseas. Since 2003, the Adoption Center has specialized in providing medical and developmental care to adopted children. Hundreds of children and families have been shepherded through the process of adoption by our empathetic and expert staff.

I have no preference regarding where the child comes from... what I'm interested in is to adopt where the need is highest, or where I'm helping to alleviate a problem... and it looks like of course, the need is high everywhere, but it's becoming harder to adopt internationally due to restraints created by the foreign countries... which is unfortunate.  I am fully open to domestic adoption, and after finding out the above info, it makes alot more sense for me... also considering that I most likely will not be wealthy enough to afford international adoption. Someday if I do get rich, I might put myself on the waiting list ;)